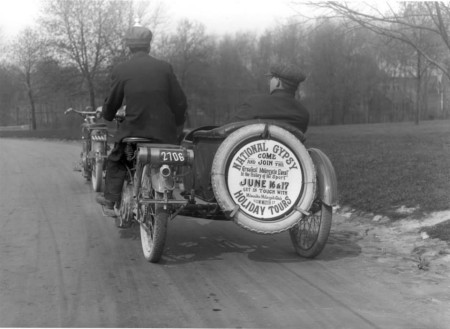 The first National Gypsy Tour was held in 1917, as shown in this photo from that year. Gypsy Tours were large rallies organized by local motorcycle clubs. In 1939, the tours kicked off on August 15th. The events usually included a motorcycle tour that ended at a park where games and competitions were held. Participants were awarded watch fobs and trophies were handed out for various categories at a national level. These categories included best dressed, highest percentage of military participation, highest percentage of female participation, most riders, and fastest times for racing events.Gypsy Tours were open to all and were social events that attracted thousands of participants. They were billed as a way to show the public the fun times that could be had on a motorcycle. Although the American Motorcycle Association set the official date for when Gypsy Tours would take place, individual motorcycle clubs were free to hold them anytime during the summer. Gypsy Tours attracted large crowds, but their popularity began to fade in the late 1950s.The tradition of events like the Gypsy Tours were never lost, though, as motorcycle clubs around the country still hold annual rallies and tours.