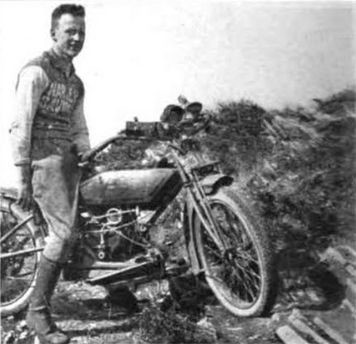 Ted Gilbert became the first motorcyclist to pilot a machine to the top of the rocky butte near Portland, Oregon. His machine of choice was a Harley-Davidson Sport Twin. 4,045 feet above sea level, Larch Mountain is 11,000 feet of narrow, brushlined trail. Rugged and heavily timbered, with huge boulders, sharp stones, and logs lining its sides, it had previously withstood all attempts to reach its summit on a motor vehicle. The three-mile climb took 2 hours and 20 minutes and needed neither chains nor a tractor band to help the Sport Model along. A big sign measuring 4 feet by 6 feet nailed to the side of a mighty fir tree marks the time, the name “Harley-Davidson Sport Model,” and the name of its rider, so that when Mazamas and various other organizations of mountain climbers would later reach the top, they would be able to see that other things besides goats and nags could climb the hazardous cliffs of Larch Mountain.

Harley’s Sport Model can also be credited with other endurance feats. H.C. “Hap” Scherer rode a Sport Model to break the Three Flag Record in 1920, riding from Canada to Mexico in 64 hours, 58 minutes, breaking the previous record by more than 5 hours. He also smashed the Denver-Chicago record that same year, riding more than 1,260 hilly miles for nearly 48 continuous hours. Throughout its life, 20,000 miles were accumulated on Scherer’s Sport Model, a testament to its agility and endurance.